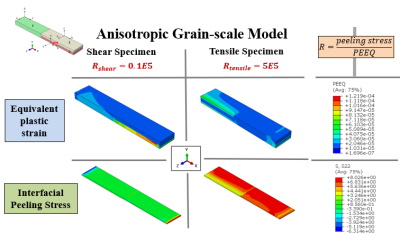 Heterogeneous integration is leading to unprecedented miniaturization of solder joints, often with thousands of joints within a single package. The thermo-mechanical behavior of such SAC solder joints is critically important to assembly performance and reliability. However, this response can be extremely challenging to predict due to the tremendous joint-to-joint variability observed in solder joints, as each joint consists of a unique arrangement of a few large highly-anisotropic grains. Similar variability has been observed in recent experiments where thermal cycling of BGA joints under axial compression (caused by the clamping force of heat sinks) produced large lateral creep deformations that were difficult to predict with simple homogeneous isotropic viscoplastic models.

This presentation focuses on an alternate modeling approach, where the discrete grain morphology of these few-grained SAC solder joints is explicitly modeled with anisotropic viscoplastic grains, connected by viscoplastic grain boundaries. The anisotropic mechanical behavior of each solder grain is modeled with a multiscale crystal-viscoplasticity (CV) approach, based on anisotropic dislocation mechanics and typical microstructural features of SAC crystals. Model constants are calibrated with single crystal data from the literature and from experiments. Furthermore, as the microstructure of lead-free SAC solder joints continues to evolve throughout its service life, the CV model is able to capture the corresponding degradation of the thermo-mechanical performance and to provide insights into its long-term influence on reliability.

Qian Jiang is a Ph.D. candidate in Mechanical Engineering and a graduate research assistant at CALCE. Her dissertation research is in the field of anisotropic creep and elastic behavior of SnAgCu solder alloy, based on the microstructure and mechanistic modeling approaches. She has worked on several other CALCE research projects, notably the characterization on properties and durability of solder materials under various temperature/loading conditions, and fatigue failure in Cu redistributions layers on wafer level chip scale package. Ms. Jiang is being advised by Professor Abhijit Dasgupta.